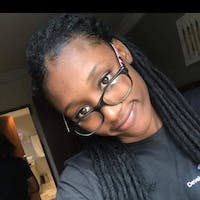 In a web server, authentication (https://g.co/kgs/Yy9RH2) is used to verify a user in the client-side trying to access the database or the site. The server can achieve this in various ways but in most cases, the server uses the user's information like the username and password while authorization (https://g.co/kgs/7ryDCC) is a process by which a server determines if the client has permission to access or use a resource on a site. Authorization is usually done using sessions ( https://g.co/kgs/vZViVo ) or tokens.

Cookies and Sessions are used to store information. Cookies are only stored on the client-side machine, while sessions get stored on the client as well as a server. When a User logs in, the server creates a session for the user and stores it in the memory. The server then creates an id called session id which is stored in a cookie on the browser (https://en.wikipedia.org/wiki/HTTP_cookie). When the User makes a request to the server, the request is sent along with the cookie. The server then checks the session id and compares it with the session information saved in its memory. After the verification is completed by the server, the server responds with the data to the User.

Let's get started with the following steps: 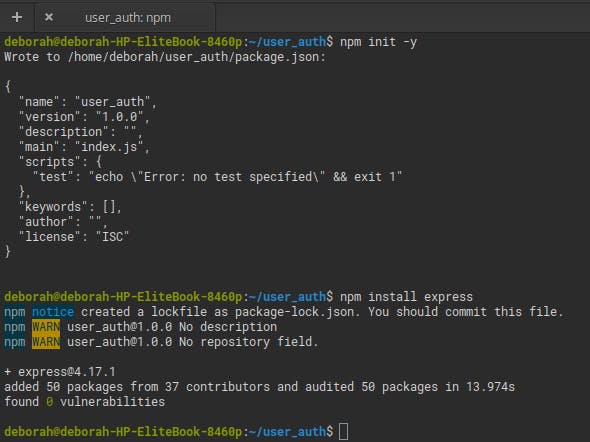 Your server starts running but returns nothing. Now let's create routes and start making requests to the server.

Your app requires that users login with their username and password 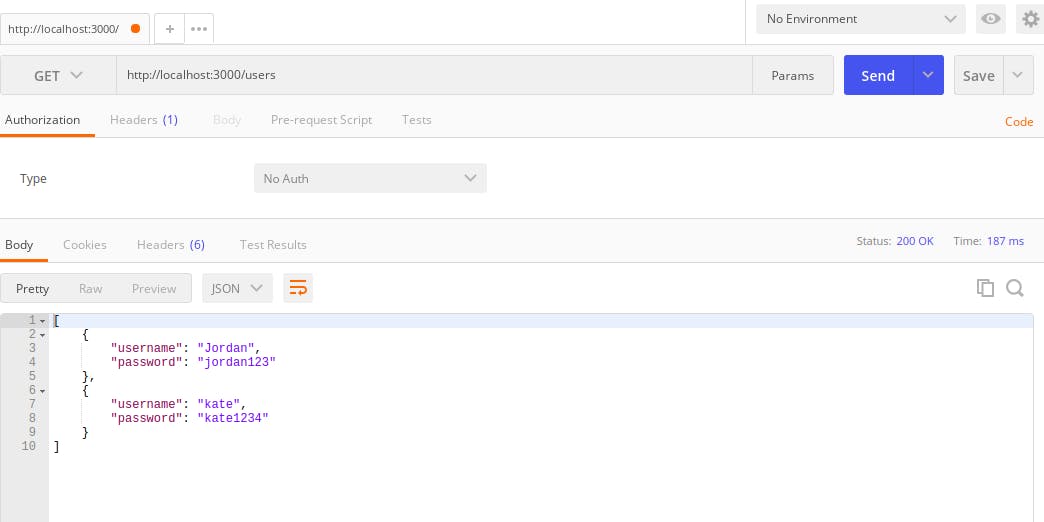 The passwords of the users are in plain text in the database which means anyone that gains access to your database can have access to all the passwords of your users and be able to do anything with it. To avoid this we use hashing which can be achieved by a library called bcrypt.

There is a process of hiding the passwords for security reasons from been seen by anyone who gains access to your database and it is called Hashing. Hashing a password is the process of converting a password with a one-way algorithm and a hash function into a string that is difficult to be reversed. Bycrpt is a library designed for hashing passwords by combining a salt with the hashed password. A salt is random data that is used as an additional input to a one-way function that hashes data.

So in your app, install the bcrypt library with npm install bcrypt. After it's done installing, include it in your server.js file with the require() function

To implement this, we need to create a route. So create a POST request to the users route.

Delete the objects in the users array in servers.js file and set it to an empty array. When you use the POST request, you will create a user that will be added to the empty array(the database).

So in your route handler for the POST request to the '/users route, create a user

While your server is still running, go to postman and make this post request to this route http://localhost:3000/users, set the type of request to JSON(application/json) and in the body of the request include the JSON object of the name and password of the user.

The body of the request.

The body of the response.

Now create a post request on postman again and see that your response for password is now hashed!

Try making a GET request on postman and it will respond with the user's username and password will be hashed.

Now that you have successfully been able to hash the password of a user and get the information of the user. The next thing to do is to create the login route that will check/compare the user's information with that which was created and you can achieve this by using the bcrypt.compare() method.

In the login route, the first thing you will do is get the user then check if the user exists, if the user does not exist, throw an error. Use the try catch block as you did in the previous route '/users' for the POST request. In the try block, use the bcrypt.compare() methods that accepts two parameters; the first parameter is the password of the body of the request and the second parameter is the hashed password and compares them to see if they match, if they match, respond with success and if they do not match, the catch block will handle the error and respond with a message 'user not allowed'.

To test this code on postman,

THE COMPARISON BETWEEN SESSIONS AND JSON WEB TOKEN FOR AUTHORIZATION 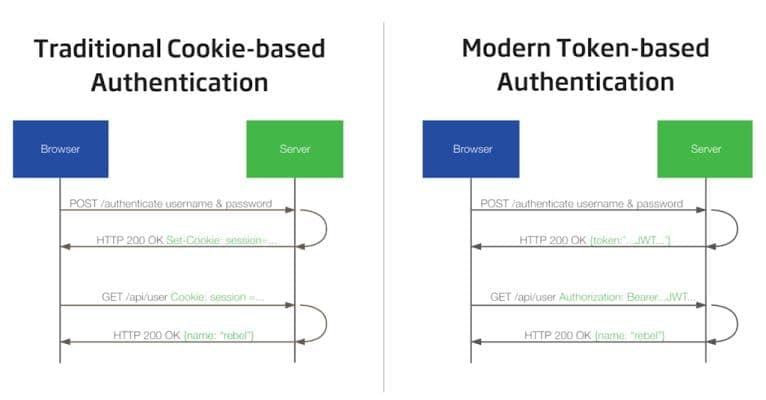 The image on the left represents authorization with sessions. First, the user creates an account and logs in with a username and password on the browser via the POST request. The server authenticates the requests like you just did above and will create a session for the user and store it in the memory. The server then creates an id called session id which is stored in a cookie on the browser (https://en.wikipedia.org/wiki/HTTP_cookie). When the User makes a request to the server, the request is sent along with the cookie. The server then checks the session id and compares it with the session information saved in its memory. After the verification is completed by the server, the server responds with the data to the User.

The image on the right represents authorization with JSON WEB TOKENS, the user creates an account and logs in with the username and password via the POST request to the server. After authentication is successful, the server creates a token called the JSON WEB TOKEN, this token is signed or serialized with a secret key by the server and is sent to the client. When the user makes a request to any page on the site, the request is sent alongside the JWT to the server on the Authorization header. Then the JWT signature gets the user information from the JWT and verifies it, then sends a response to the client.

THE DESCRIPTION OF THE STRUCTURE OF JWT

JWT has a structure consisting of three parts; the header, the payload and the verify signature. Below is a diagram which can be found on jwt.io that shows these three parts of JWT 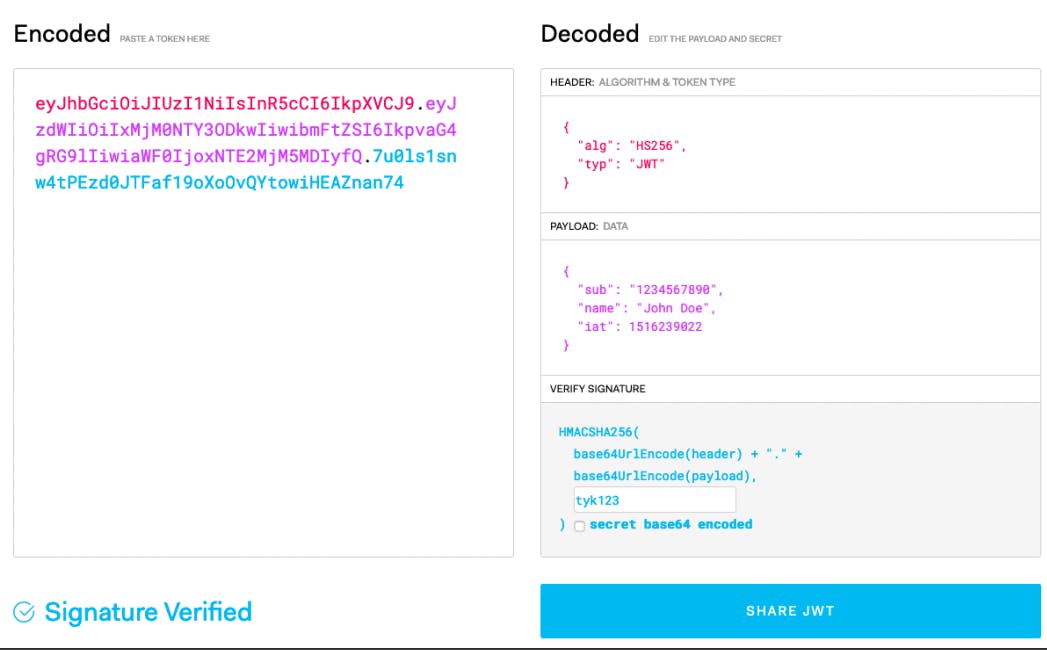 To the left is the encoded token which is sent to and from the user and to the right are the three parts, the header consists of the algorithm for verifying the signature and the type of the token which is JWT.

The second part, the payload is the data of the user and it comprises of three parts; the reserved, the private and the public. The reserved part of the payload is the predefined and optional but recommended part that consists of information of the user like the exp(expiration date of the token), isa(issued at/manufacturing date of the token) and sub(subject) etc. The public part can be defined at will.

The third part, the verify signature is the part that takes the header and payload and base64URL encodes each of them together with a secret key and hash them with an alogrithm defined in the header.

THE IMPLEMENTATION OF JWT FOR AUTHORIZATION IN NODEJS

You will be creating the token In your server.js file, in the post request to the /users/login route.

To implement JWT in your app, the first thing you need to do is install the jsonwebtokens and dotenv libraries to be able to generate tokens and secret keys that will be used to serialize your user object.

STEPS FOR IMPLEMENTING JWT IN YOUR APP

To test this code, copy the token returned by the user and on postman create a GET request to this route http://localhost:3000/products and in the Headers - key, set it to Authorization and in the value, paste the token and click on Send. It should return this below in the body of the response

Now you have successfully completed authentication for a user with bcrypt and authorization with JSON WEB TOKENS with dotenv and the crypto library for your app. 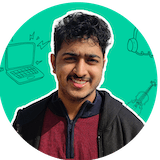